Few artists are as intrinsically linked to the 1980s as Patrick Nagel.  Maybe you never knew his name, but you have surely seen his women. He created the woman on Duran Duran’s second album, Rio in 1982.  It was a runaway success, with 80s hits you still hear on the radio today: Rio, Hungry Like The Wolf and Save a Prayer.

Duran Duran was determined to be a massive success in America.  On Rio’s inner sleeve, they stand posed in boldly colored, big shouldered suits, having left their soft, foppish New Romantic clothing behind in England.  They further hardened things up with the sharp lines and saturated colors of Nagel’s artwork: Rio’s smile looks like it could cut glass, as do her earrings: 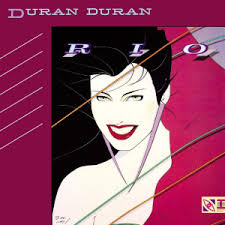 Patrick Nagel was born in 1945 In Dayton, Ohio and raised in Los Angeles.    He served as a ranger in combat in Vietnam. Upon his return, he attended art school, earning his B.A. in Fine Arts from California State University, Fullerton in 1969.  He was married to model Jennifer Dumas at the time of his death in 1984.

His compositions are uncluttered, with dramatic, strongly defined lines (usually in black).  His palettes appear almost lacquered, often consisting of pinks, creams, blues and purples, with occasional hits of yellows, reds and greens. 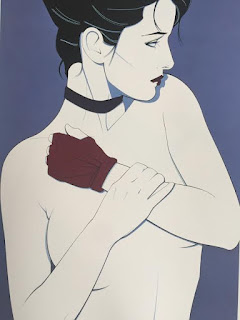 The “Patrick Nagel Woman” became a ubiquitous presence in the 1980s, adorning calendars and posters in rooms all over the world.  The Nagel woman was sexy, whether she was wearing shades, looking off in the distance or directly in your eyes. She was cool, beautiful, visually arresting.   The unassuming fellow who created these idealized women was by all accounts a friendly guy who was generous and down to earth. 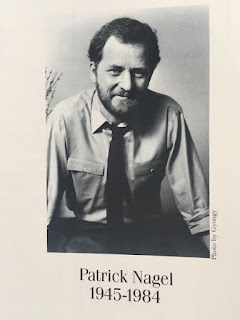 His first major job, and the one that brought him to national attention, was for Playboy in 1976.  He created many illustrations for the magazine over several years. Hugh Hefner wrote a glowing essay about him for a book published by Alfred van der Marck Editions in 1985 called Nagel: The Art of Patrick Nagel. This retrospective of his work contains many loving tributes to the man. 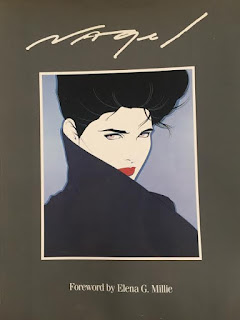 Nagel’s Playboy artwork drew the attention of readers, who all wanted to know: who was this guy?

(The following images are from Nagel: The Artwork of Patrick Nagel and were originally published in Playboy magazine) 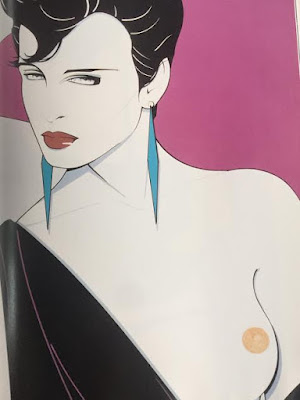 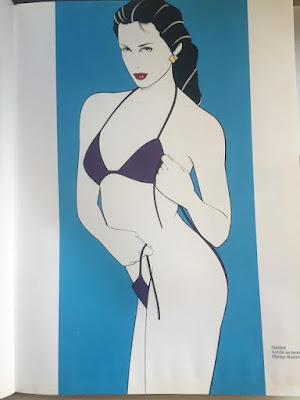 From there his career took off like a freight train, and Nagel churned out hundreds of images.  His style became one of the most defining of the decade and he was widely copied.

This interesting article by the thenailscape.com ponders why counterfeit images of the Patrick Nagel woman became ubiquitous in nail salon windows (and I might add, dry cleaners).  Could it be that the colors he uses remind people of nail polish? Or that the image of a knock-off “Nagel Woman” is meant to lure customers into believing they will be cooly chic and gorgeous after their mani/pedi?     As for the dry cleaners, I’m not sure what the link is. 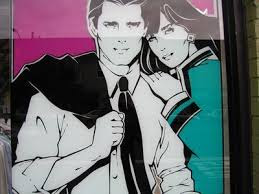 My brother in law was a huge Patrick Nagel fan in the 1980s.  (He also was a huge Prince fan and always made me a cassette tape of Prince’s latest album.  Thanks, Sean!) He and my sister decorated their first apartments together in the late 1980s/early 1990s with what else:  lots of Patrick Nagel posters and calendars. Lucky for me, they saved a lot of that artwork. They also own the Nagel book I mentioned above, which was a wonderful resource.  All of the following images are from the Nagel book and from Jenn and Sean’s personal collection of posters and calendars. 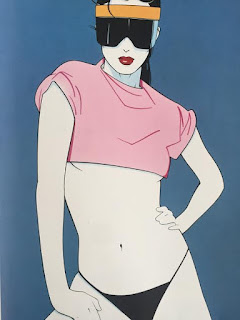 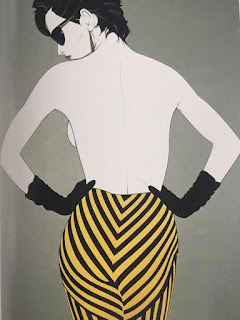 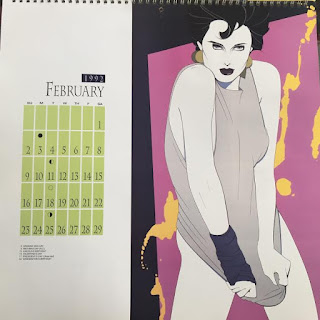 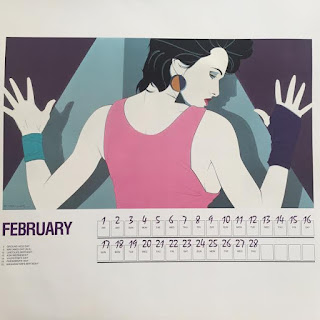 Eventually, Nagel branched out and started drawing men, which was well received by the public. 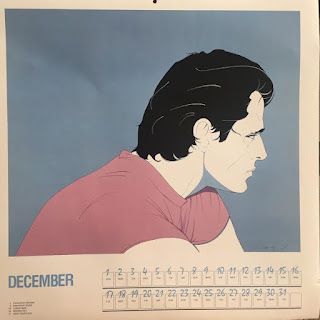 But before he could really establish the Patrick Nagel Man in the pantheon of American Art, Nagel died at age 38. He had a penchant for chocolate shakes, cigarettes, martinis and fast food.  By 1984 the world had connected the images with the man and Nagel was invited to a celebrity “Aerobathon” event to raise money for the American Heart Association. His friends were concerned because as an artist, he was pretty sedentary and never exercised.  He waved them off and participated. After the event, he went back to his car where he had a heart attack and died.

Patrick Nagel's art continued to be commercially popular well into the 1990s.  His style was so pervasive it permeated the public consciousness, and remains influential to this day.  I happened upon this mural on Bleecker Street just yesterday and it seems reminiscent of Nagel. It features Debbie Harry (who rose to icon status in the 80s), her pale skin offset by bold colors and washes of jet black.

I wonder where Nagel's art might have gone had he not passed away so young. Would it have changed with the times? I think so. As it is, Patrick Nagel and his iconic artwork is frozen in time, to be forever associated with the 1980s.