While leafing through my July/August 1985 copy of Vogue Patterns Magazine, I noticed this pattern: 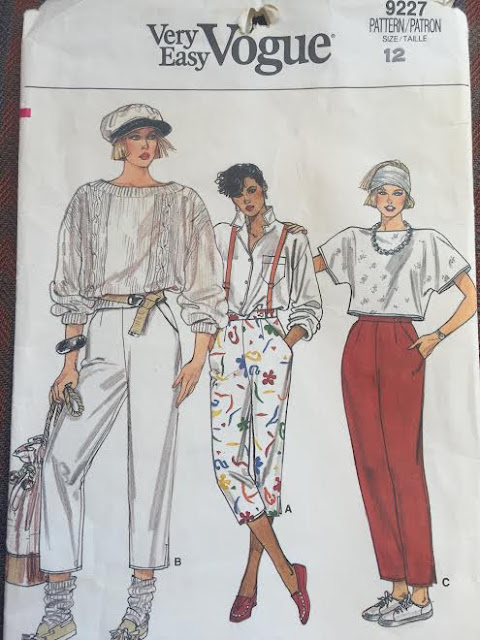 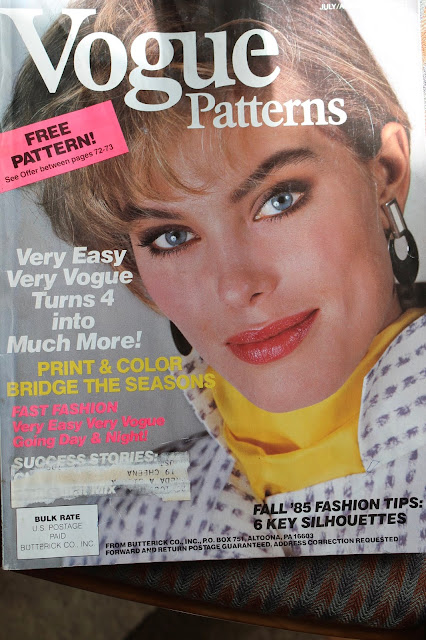 The pants were paired with their “Ultimate Big Shirt” (Vogue 9324) in a photo spread called Easy Fast Fashions for Summer. Needless to say, I tracked both patterns down online!


In September, people shift gears from summer to fall and school starts up again.  In Chinese Medicine, this transitional period is acknowledged as a 5th Season called Late Summer. (Back in the 80s, we called this time Indian Summer).  The days are getting shorter, the leaves are starting to change but it’s still 80 degrees outside!

We have been experiencing that transitional feeling a lot lately in New York.  Cooler days are intermixed with very warm ones; it can be hot in the sun but cool in the shade.
I decided these pants in the ankle length version would be a good choice for early fall (as opposed to the mid-calf length which screams Summer).  I had a navy dotted tan midweight cotton that I got at Walmart a few years ago. It’s the kind of fabric that will be comfortable on all but the coldest of days.  In other words, perfect for right now!
Tan and Navy are a classic combination.  Those of us who were alive and shopping in the 1980s may remember that Tan and Red also had a moment, especially in the early 80s.


Was it because those Thom McAn hiking boots with the red laces were everywhere back then? 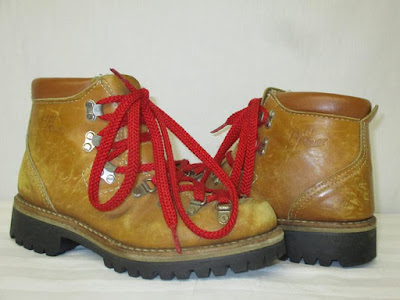 Hits of Navy and White sharpened things up; puffer vests and jackets often came in these color combinations. 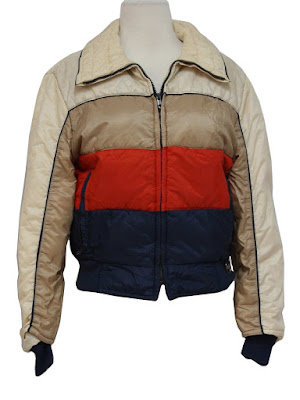 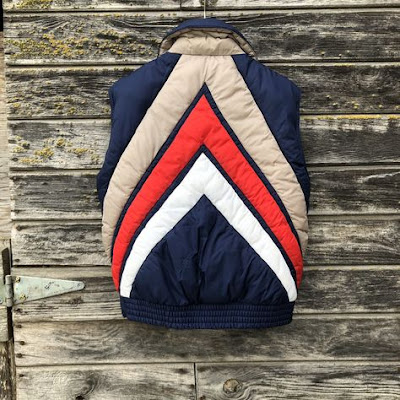 I find this palette of colors to be vivid yet earthy, and all are good choices as we move from summer into fall.

I had no major snafus in the making of these pants (it is “Very Easy” after all) and I lengthened them by 1.5 inches. 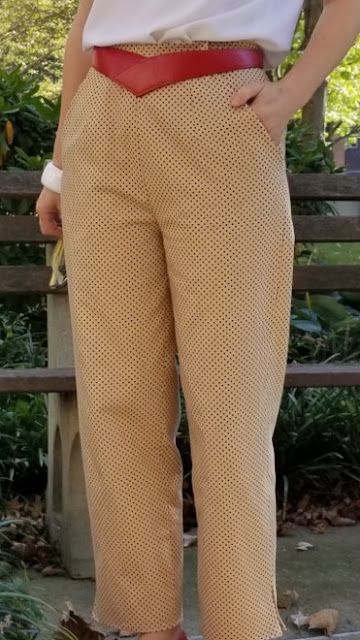 Never a believer in the No White After Labor Day Rule, I paired the pants with a bright white top I had made from this very useful 1981 McCall's pattern. 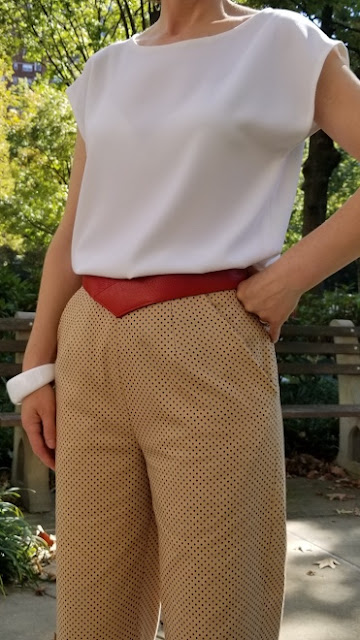 The fabric is a some kind of semi-opaque crepe.

The matching bright white lucite cuff is 80s vintage and was purchased here. 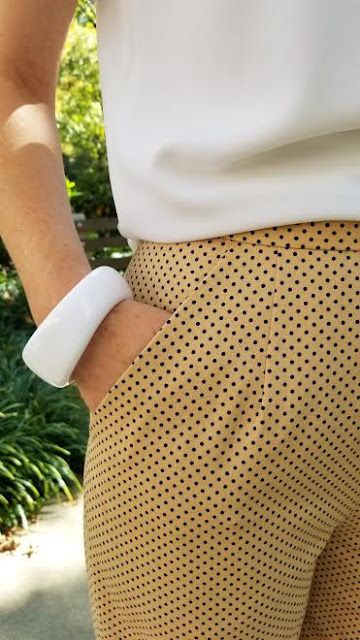 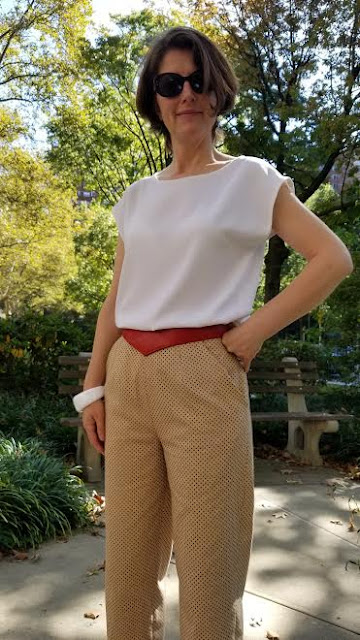 Another shoe that was big in the 80s were moccasins, particularly those made by Minnetonka.  Their iconic moccasin with the Thunderbird beadwork debuted in 1955. Enduringly popular, they became “a worldwide favorite during the 1980s Urban Cowboy trend” according to their website.  In 1986 they released their “driving moc” which immediately gained traction among the Preppy set.

The red suede moccasins I’m wearing are not Minnetoka, but are similar in style to their “driving moc” and are made by Michael Kors. 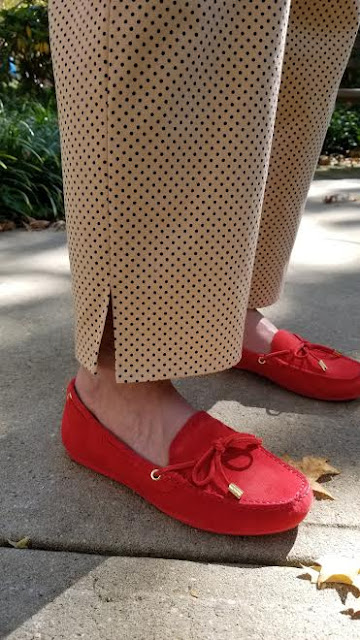 Eventually I let it all hang out and cast the belt aside: 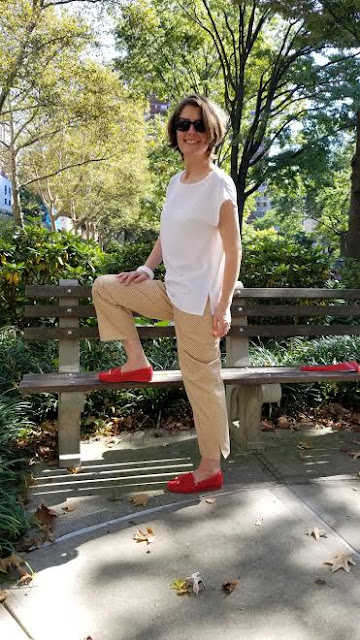 I love how the shirt and pants have matching hemline slits! 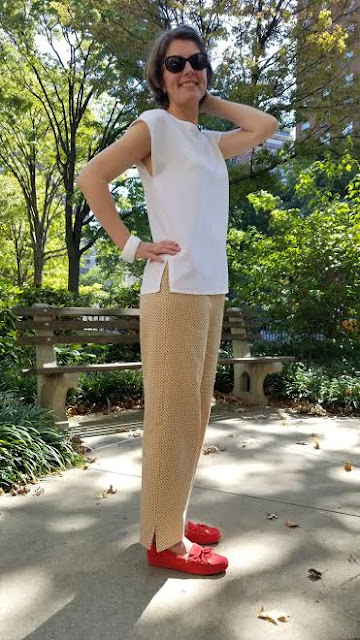 These pants would look cute with a cropped navy blue sweater and ankle boots when it gets cooler and the moccasins go back in the closet.   I’m sure boot weather is coming soon, it just doesn’t feel like it quite yet! 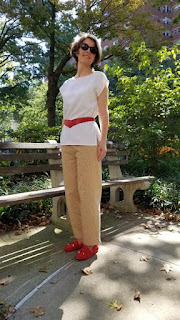 Last spring, I encountered this stretch cotton sateen at Mood Fabrics in NYC.  It immediately brought to mind fashion designer Stephen Sprouse, who transformed the fashion world in the 1980s.   I happily purchased several yards in both colorways: 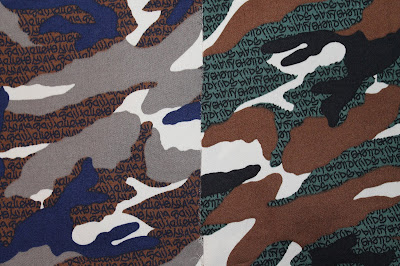 Stephen Sprouse was born in Dayton, Ohio in 1953 to Norbert and Joanne Sprouse.  When he was 2, the family moved to Indiana. It isn’t a stretch to say he was a born fashion designer.  As a young child, his fashion sketches showed such talent that his parents wondered if they had a prodigy on their hands (at age 14 he did a summer internship in NYC with Bill Blass).

Stephen attended the Rhode Island School of Design briefly in the early 1970s.  But he dropped out after securing a job with Halston in New York City, the reigning king of fashion at the time.

After working for Halston for a few years,  Stephen struck out on his own. During the late 70s and early 80s, he formed intense friendships with up and coming artists, designers, models and musicians in the burgeoning NYC punk rock music scene.  Debbie Harry of Blondie was a particularly close friend, and he loved to dress her for shows.

In 1982 he was part of a show of emerging designers, put on to promote the launch of Polaroid’s SX-70 camera.  His transformative and innovative mini collection reflected elements that would become his trademarks: Day-Glo colors, 1960s inspired silhouettes, graffiti printed on luxurious, high end fabrics and the “energy of the streets.”   He went on to release collections throughout the mid-80s.

In the late 1980s his friend Andy Warhol allowed Stephen to incorporate imagery from Andy’s “Camouflage” series of paintings into his clothing line.  These pieces fetched high prices and are still coveted today. 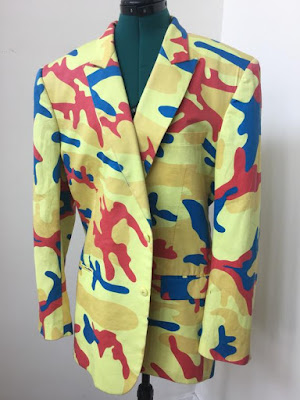 Throughout the 1990s,  Sprouse’s downtown, “underground” pop art/punk style was always in demand by those in high-end fashion circles.  In 2001, he collaborated with Marc Jacobs to produce a line which included the famous graffitted and “defaced” Louis Vuitton bags (a perfect nod to the admixture of  refined uptown sensibility and the gritty downtown look). 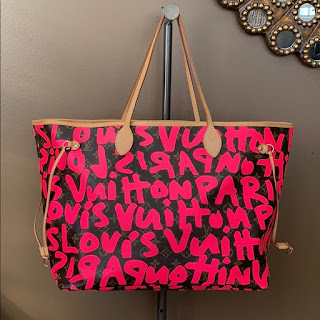 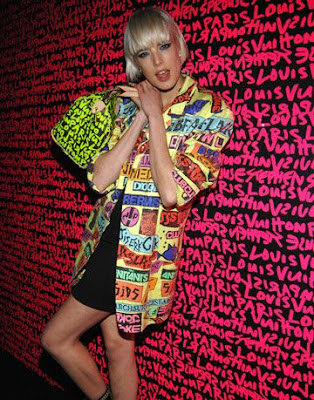 In 2002, he released an affordable clothing line at Target called “Americaland”, featuring his signature grafitti “street” style done in a palette consisting mainly of red, white and blue. 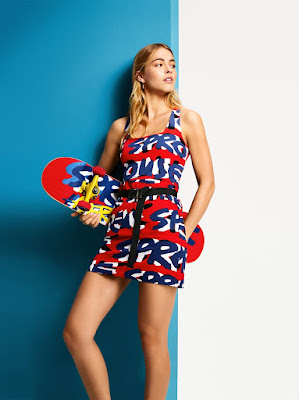 (As it so happens Target is releasing a 20 year retrospective of collections created by some big-name designers over the years, including Stephen Sprouse, Marimekko and Isaac Mizrahi!)

So you can see why I was excited to find this fabric.  It is NOT described by Mood as a “Stephen Sprouse” inspired design.  But the melding of graffiti and camouflage surely brings this 1980s fashion genius to mind.

I decided to use this 1980 jumpsuit pattern and the fabric in the brown and blue spruce colorway.  It’s not exactly a utilitarian design, but I hoped the zip front would blend well with the camo: 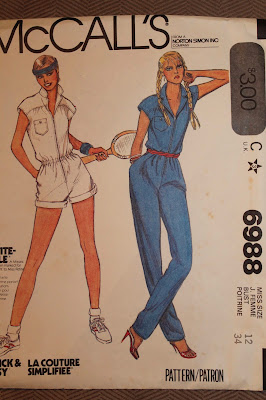 I encountered no real issues in the creation of this jumpsuit.  I did take care with pattern matching, ensuring that the design flowed at the center and yoke seams (this required that I recut and replace the yokes when I saw that the design repeated too closely).

This is my first piece of camouflage clothing (when you are looking for it, you see it on people everywhere!).  I felt surprisingly comfortable in camo, and very on trend!


Here is my jumpsuit.  It is very comfortable, looks good in heels and sandals and I love the front zip! 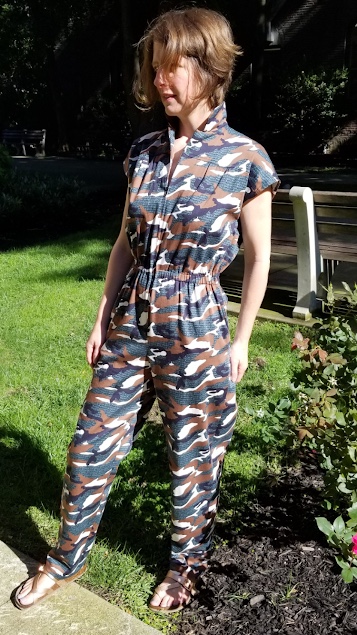 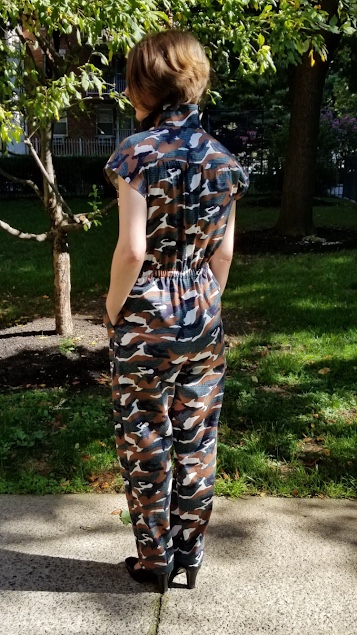 I tried pairing it with this vintage 80s white belt (I prefer it without a belt): 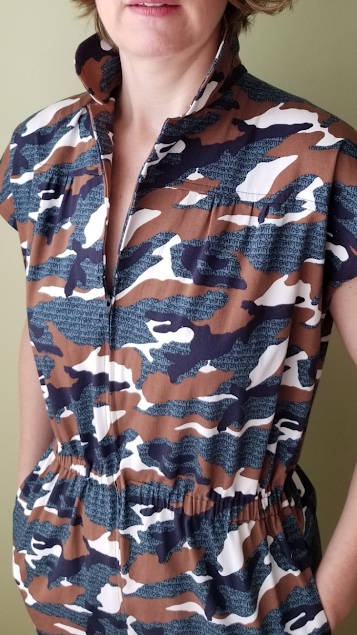 The pattern called for wide bias tape to make the casing for the elastic, but I just used a strip of fabric: 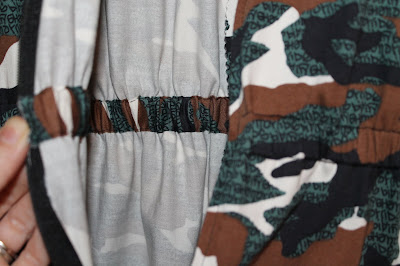 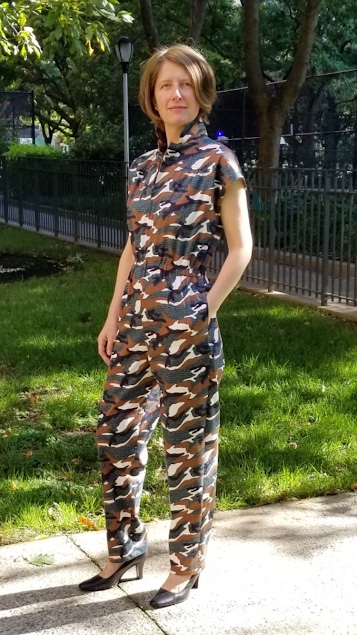 In the year or so before his death, Stephen was in treatment for lung cancer,  but had kept this very serious diagnosis largely private. It was therefore a shock to many when Stephen Sprouse died of heart failure on March 4, 2004.

The Stephen Sprouse Book, by Roger Padilha and Mauricio Padilha and published by Rizzoli, has plenty of photographs of clothing from his runway shows and other clothing lines, and some of those can be found on the website thestephensprousebook.com.   This book, as well as Stephen Sprouse: Xerox/Rock/Art were my main sources in writing this post.

These are wonderful volumes on the life and work of a great American fashion designer, Stephen Sprouse, whose influence is still felt to this day.

It was fun to open the box when it arrived, having been such a devotee of their makeup and nail polishes back in the 80s. There I was a gazillion years later, all excited with my Wet n Wild purchase once again! To be sure, the company has evolved and stayed current, coming up with so many fun, high quality products. Yet they are proud of their past and remain true to their values: Wet n Wild is still extremely affordable and cruelty-free.

I have been using all of the skincare products off and on since, and have been really happy with them.  The toner removes dirt and oil really well, and the multi-use facial oil is a great moisturizer for day or night.  The scrub works and tastes yummy, and the Tint of Corruption jelly lip balm is AWESOME. It tints my lips the most perfect, natural shade of pink, leaving behind a light sheen.   I wasn’t really using the serum, because I thought of it as a prelude to makeup which I don’t wear that often.

Well, I was missing out on an important benefit by neglecting to apply the serum to my naked and aging face.  For this serum has the miraculous ability to TIGHTEN YOUR SKIN.

This ability was brought to my attention by my friend Rachel.  When she first got her Rebel Rose Skincare box, she dove right in and applied the products not only to herself, but to her mother Sandy.

In particular, they got interesting and impressive results with the Photofocus Rose Primer Serum. 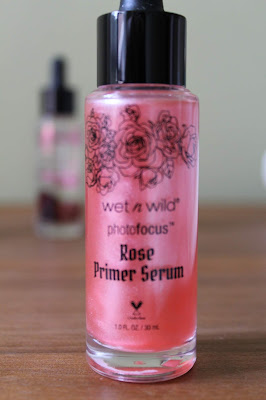 What follows are before and after pictures Rachel’s hand and Sandy’s arm.  It is clear that the serum tightened up their skin and smoothed things out quite a bit. 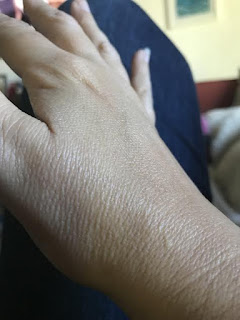 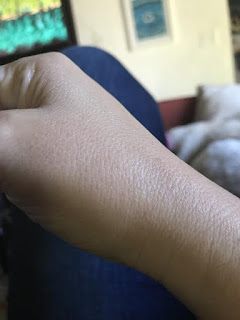 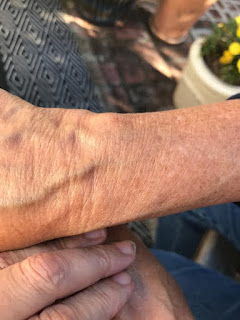 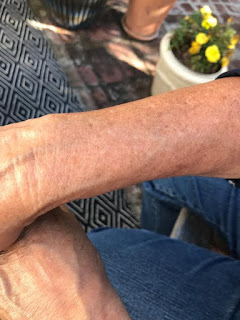 When she texted these pictures to me, I was REALLY impressed.  I think there is a dramatic difference!

Yesterday, I applied the serum to half of my face, concentrating on the vertical lines, or creases, that sometimes occur between the nose and the outer corners of the lips.  On me, they aren’t too deep yet but trust me--they’re there!

The serum has a watery consistency, and I was reminded of egg whites as the serum slowly dried on my face.  Egg white masks are known to tighten the skin and shrink pores (this woman mixes honey into her egg white mask and applies it with a fan brush).

I left the house into a lovely bright day and jumped into my car (heedless of showing up to work with only half my face painted in serum).  At stoplights, I peered closely into the rearview mirror. All that natural light was going to show me the good, the bad and the ugly!

Without a doubt, the crease on the serum side of my face was diminished and smoother!  Gazing at myself in my rearview earned me some honks from the drivers behind me (if you don’t move instantly in this city the moment the light changes, people will lay on that horn!).  But I couldn’t help it. I kept changing the angle of my head and scrutinizing my face. Yes, this serum works!

I did take a “selfie” with an idea to post it here.  Alas, I am not brave enough to publish such an “up close and personal” photo, so you’ll just have to trust me!

In the future, I will use this primer serum under my moisturizer, especially when I want to have a bit of a youthful and dewy glow. It seems important to let it dry a few minutes before putting anything on top of it. While I'm waiting, I can turn back the clock on my lips with my Perfect Pout lip scrub!

Would the serum truly “erase” lines from your face?  My sense is that it’s a temporary fix, but I don’t know.   I should use it consistently and see what happens. If do, I will be sure to report back!

(Special thanks to Rachel and Sandy for the feedback and photos!)
at September 09, 2019 1 comment: