It was an easy decision to purchase Kwik-Sew 1932. 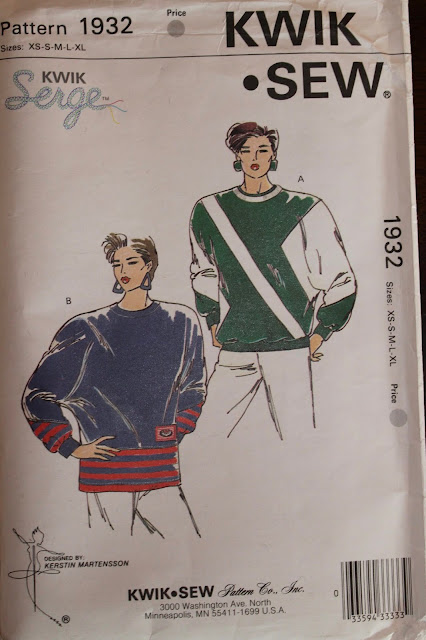 The line drawings are awesome. The shoulder pads are so big the models look like linebackers!  But their big earrings and short haircuts are way cool.

I initially thought I would make View A. 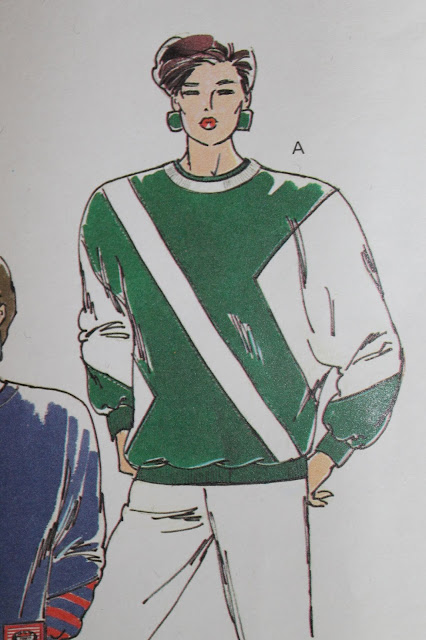 (I both love and hate this. Only after making it would I know which emotion prevailed.)

At the same time I was ruminating on this pattern, I was doing some casual internet research on a short-lived British clothing company called Bodymap.  Founded in 1982 by friends Stevie Stewart and David Holah, they earned many accolades and were considered very avant-garde. But they were a bit too “out there” for some buyers.  Their oddly titled fashion shows (such as The Cat in the Hat takes a Rumble with the Techno Fish) and non-traditional models (they embraced all ages and body-types, and often the models cross-dressed) put off some of the fashion “establishment.”   But everyone else thought they were cool and they experienced great success.

Bodymap seemed to be about layering prints and textures.  A lot of their ensembles had an unstructured look and were made out of inexpensive, accessible fabrics.   Holes were placed in unexpected locations. Some pieces were oversized while others seemed to emphasize the contours of the body.  They worked predominantly in black, white and cream and stripes seemed to show up often: 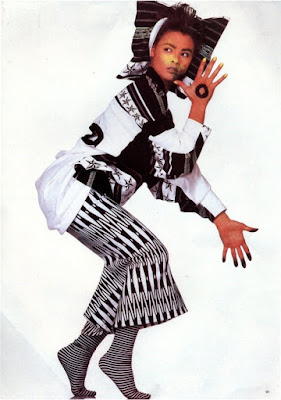 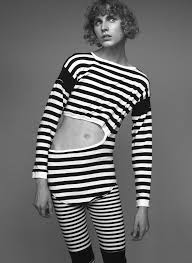 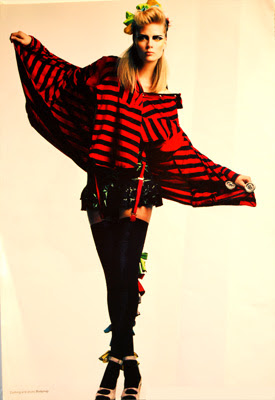 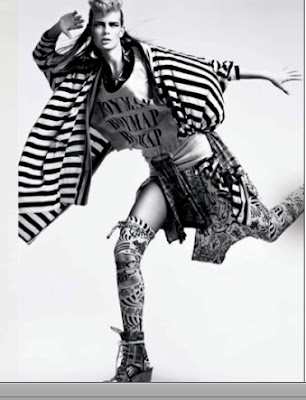 Sadly, Bodymap was a bright star that soon fizzled.  Amid financial struggles, they closed down in the late 1980s.

Although I don’t remember the Bodymap brand, I can see their influence in a lot of 80s looks and trends.  The layering of several different types of clothing at once (baggy, tight, ripped, stripes, tribal, shots of bright color) was definitely a look back then.


I really liked a lot of Bodymap’s elements. Soon, those elements were inspiring me to see View B in black and white stars and stripes, and the rest is baggy sweatshirt history! 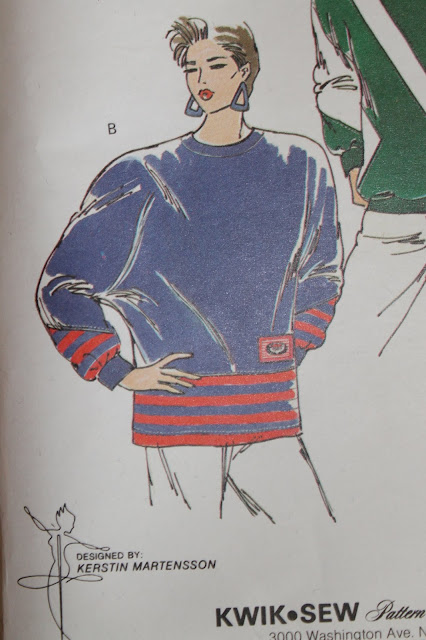 Kwik-Sew 1932 is also a Kwik-Serge pattern, which means it is designed to be sewn on either a regular sewing machine or on a serger.

I have stated on this blog that my mother has owned only ONE sewing machine her whole life: a Singer Touch n Sew gifted to her by my dad in 1966. But that isn’t 100% true, because for a brief time she owned a serger.

A serger is a sturdy little machine with 4 spools, whose threads are guided through a TV antenna-looking thing into a series of complicated channels and hooks.  The threads zig zag around inside the machine for a time before converging at the throat plate, where two threads enter two needles and the other threads enter some other metal thingamajigs.

As you push your fabric under the presser foot, a very sharp little knife, also at the throat plate (visible to the eye and rather near your fingers) chops off the edge of the fabric as the threads are loop-de-looping over the edge, so the end result is this: 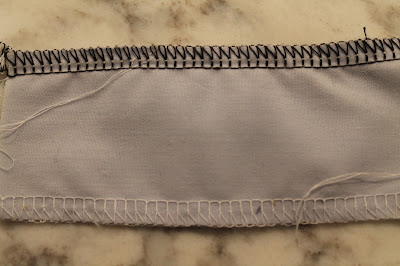 You have a “professional” looking finish, much like what you see inside many RTW (“ready-to-wear”) items, especially knit tops and sweatshirts.

While many home sewists love sergers, the EZ Lock never really caught on with Mom and she gave it to me.  It didn’t catch on with me either, so I gave it back to her. Honestly, the machine looked complicated (and slightly scary).  It hung around in her house for another few years before I took it back again. I was ready to get serious about serging.

I learned the intricacies of threading the machine (large tweezers are required), and got used to the loud mechanical chopping and stabbing going on at the throat plate.  After a few practice runs, I was ready to start sewing my sweatshirt. And it did come together nicely. For the most part. 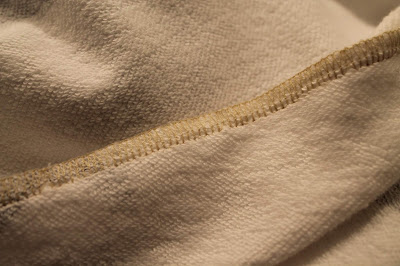 However, when it came time to sew the ribbing at the neck and sleeves, I had a problem getting the thread tension right.  My practice pieces connecting the sweatshirt material to the thicker ribbing were looking either very loose or very tight or some undesirable combination of both.

The tension on each of the four spools of thread is adjusted via the four corresponding color coded dials (the manual is helpful here in order to know if you are manipulating the upper loop, or the lower loop or whatever).  Although I fine-tuned the hell out of those dials, I never really got the thread tension on the ribbing the way I wanted it. I decided not to get tense about it (ha) and figured nobody but me would see inside the sweatshirt.  It was good enough (yet pride prevents me from sharing those inside shots with you).

Although there was a learning curve, this sweatshirt came together somewhat easily.  I got the black stars on white french terry sweatshirt fabric here. The striped fabric is a ponte knit, and the black ribbing is meant for cuffs and neckbands.  I skipped the shoulder pads (only because I didn’t have any!)

I had a certain pair of vintage earrings hanging around in my Etsy shopping cart.   I pressed the buy button when I could no longer resist the (possibly too matchy) matching opportunity the black and white stripes presented.  Plus I loved the shot of hot pink!

Should I keep the matchiness going and put on this hot pink bucket hat?

This sweatshirt would be great layered over striped leggings and a mini skirt. You don't see me wearing that however because I can't stand how leggings feel on my body and might also make me feel like an age-inappropriate Pippi Longstocking. Baggy jeans folded over and cuffed (remember how we did that to "peg" our jeans?!) will have to do! 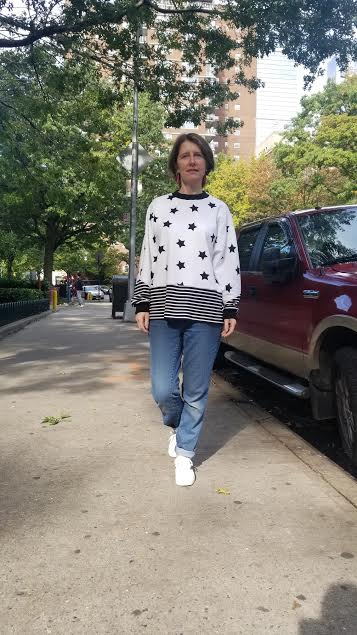 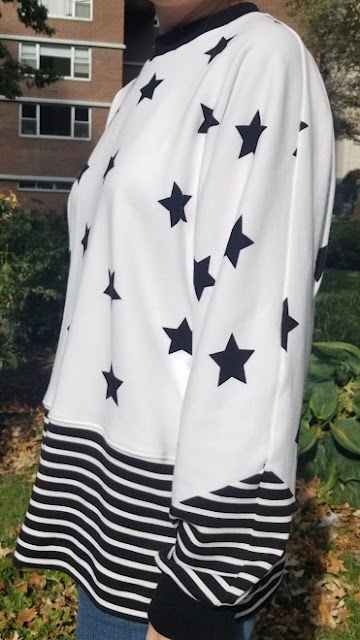 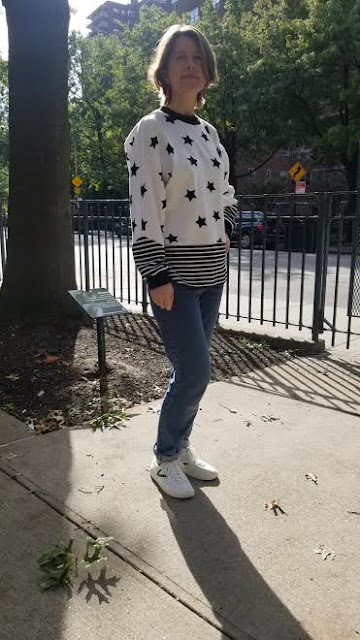 I’ve already worn my comfy sweatshirt a few times out and about.  I had wondered if the stars would look too cutesy or “twee”. I have decided they do not, and wear my Bodymap-inspired sweatshirt with pride! 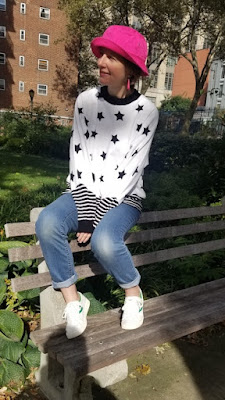