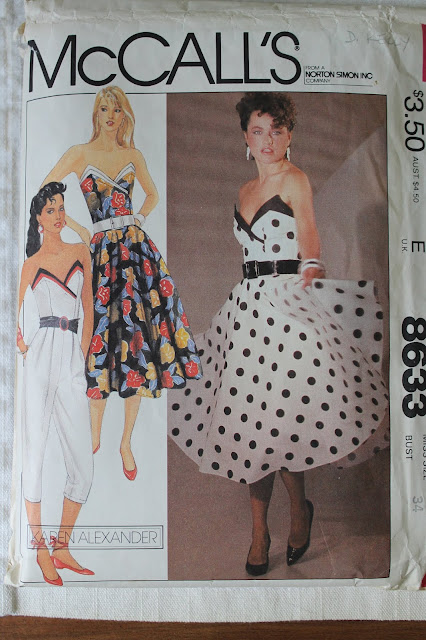 When I saw this pattern online, I snapped it right up.  The twirling girl on the pattern envelope deserves to be prom queen, be it 1983 or 2019.  The black on white polka dot fabric with black accents, even a petticoat underneath...what a beautiful, fun party dress!

But since I’m not going to the prom anytime soon, I seized on the jumpsuit version.  It gave rise to some enjoyable fantasizing. I saw myself wearing it at an outdoor rooftop bar as the summer sun set over the Hudson, laughing with my husband between sips of prosecco.  Interestingly, he gently communicated to me that this look might be a bit dated and possibly age-inappropriate. The jumpsuit might look good on a 20 year old heading for the nightclub after stepping through a time-rip, he didn’t say, but I keenly intuited.  His insights were quietly considered and then quickly disregarded.

I very much wanted this to be a successful project,  so I committed to making a full muslin. If you aren’t familiar, a muslin is just you sewing your pattern in a cheap fabric you don’t care about (an old sheet will do) or in muslin (which I did). Muslin is a rough, cheap off white cotton with no stretch that is typically used for this purpose. This way, you can see where you need to make changes in the pattern before you cut into your “fashion fabric."

A muslin helps with making fabric choices, too.  Poor fabric and pattern pairings are not unknown to me, so this was another advantage of making a muslin.  I initially planned to make it in a dark blue denim with black pleather for the 2 sets of contrast bands. However, the muslin proved that this would have been difficult to sew.  Each top contrast band has two layers of fabric between a layer of interfacing. Sewing through multiple layers of denim, pleather and interfacing could be tough on my machine and look bulky.

I then started to entertain more colorful notions, imagining it in spring green, with black contrast bands and a black belt.  Purple was also considered.

Ultimately, I decided on white or off-white, because I had an awesome vintage 80s aquamarine leather belt that I decided to build this project around.  I used white cotton twill for the jumpsuit, and an aquamarine cotton sateen for one set of contrast bands at the top to match the belt.

Miraculously, the bottom of the jumpsuit fit perfectly.  Those of you who sew know how fraught sewing pants can be.  Often, they don’t fit right and complicated alterations involving the words “crotch length” and “crotch depth” are necessary.  I was really lucky that the pants part of this jumpsuit needed no alterations except to lengthen the legs by one inch, which is easy to do.

The top however, was enormous.  This pattern is a size 12, which means the bust is 34.  I guess it’s meant for a 34DD though because I was SWIMMING in this bodice.  Alterations for the top required that I take in a total of 2.5 inches total from the side and back seams.  I also lengthened the bodice by ¾ inch, and purchased foam cups that I sewed into the top to help fill it out.  The pattern calls for boning inserted into the side seams, which also helps keep everything up.

After figuring out how to make the top smaller, it was just launder the fabric (the aquamarine fabric twice:  I had visions of it bleeding all over the white after all was sewn and done. A horrible thought!), iron it, cut it and sew it.

And here it is, in all its 80s fabulousness! 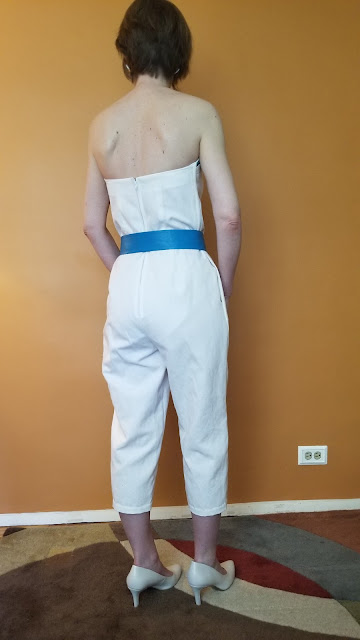 I wanted to see how the jumpsuit would look with sneakers and a t shirt.   So I threw on some Tretorns and a yellow t-shirt and went outside.

I'm not sure if it works, but it has a totally different vibe.


FYI my husband has changed his tune and rooftop drinks are in our future…..