When I found this vintage 1980s fabric in the Lula Vintage store on Etsy, I fell in LOVE. 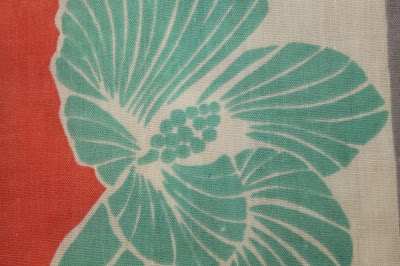 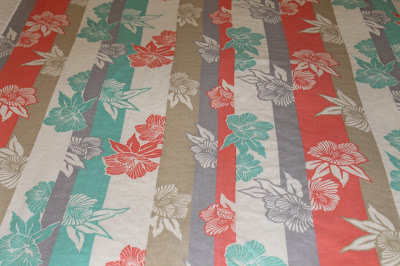 This light cotton piece featured large hibiscus flowers and uneven stripes.  The colorway was described by the shopkeeper as “very neutral” in tones of “salmon, mocha, mint, grey and white.”

I had purchased it in January and stowed it away until I found a pattern worthy of its glorious 80s-ness.  This fabric captured my imagination like no other. I would take it out now and again during those short winter days and thought of warm summer mornings, the days stretching endlessly ahead…

...the smell of chlorine, reading Seventeen Magazine while I sat on my towel after swimming in my best friend’s pool….

...going inside her air-conditioned house in my damp bathing suit (BBR!) and seeing the opening credits (and hearing the theme song!) for The Golden Girls on the TV in her living room…..

It was during such reveries that I realized this fabric needed to live its life as a summer robe.

A robe that might be worn while having morning coffee on the Golden Girls’ lanai.

What’s a lanai?
It's the porch. 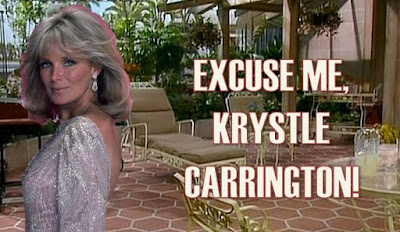 (If you don’t get this meme, please refer to Season 2, Episode 25  of The Golden Girls when Sophia asks Dorothy this question. Episode confirmation is courtesy of this blog, which recaps every GG episode in hilarious detail.)

Blanche, Rose, Dorothy and Sophia lived in an 80s dream of a house in Miami wherein they often wore awesome bathrobes while having heart-to-hearts, frequently in the kitchen.  (This fabric could just as easily have been made into throw pillows for the rattan couch in the living room.) 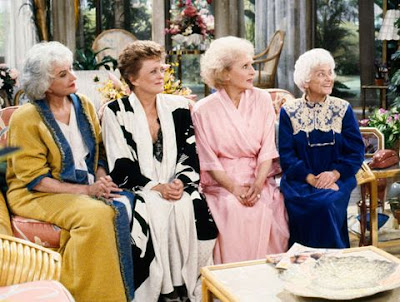 I recently discovered a wonderful website called Golden Girls Fashion Corner which features excellent analysis of GG episodes and outfits (with plenty of pictures!).  I believe that Claire coined the term “Devarobe”--a play on Blanche’s last name Devereaux and her endless supply of flowy, gorgeous bathrobes.

I settled on a kimono robe because this design would allow large swaths of the fabric to remain intact and flow beautifully from the shoulders. I had a limited amount of fabric so I had no choice but to make it a short robe. 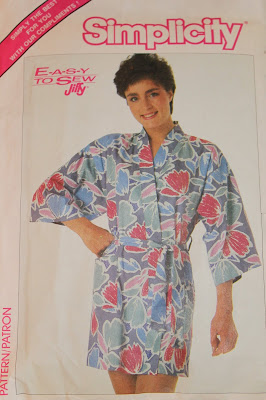 Because the stripes are uneven and the colors don’t repeat regularly, cutting out the pattern was a little challenging.  First, I had to get over my fear of ruining the project by making cutting mistakes on a piece of irreplaceable fabric. I couldn’t match every single stripe at the shoulders, because I didn’t have enough.   But that wasn’t critical because there’s so much going on and the stripes are irregular. I was able to match one stripe at the shoulders to establish harmony between back and front.

I wanted the front band to be on a white stripe, but I had run out of white stripes that were long enough and the same width.  I came up with a solution that required I cut the band in three pieces instead of two. I attempted to match the cuts with the shoulder seams but I failed to do so.  Luckily, I don’t think it’s noticeable and it doesn’t bother me.

This fabric is light-weight, slightly slubbed and semi-opaque.  The cut edges did fray quite a bit. So I used french seams and mock french seams (doing a traditional french seam on curved areas such as the shoulder seams can be tough) to enclose the seam allowances.   Here’s a shot from my Singer The New Sewing Essentials book (2008) showing how to do a Mock French Seam: 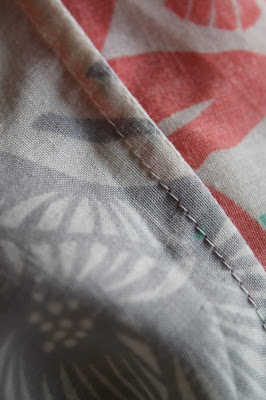 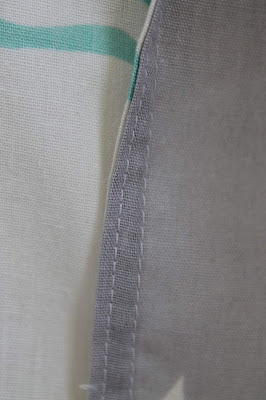 This project took a lot longer than I thought it would.  To up the quality, I hand-stitched all hems. I used something called Snug Hug which I had purchased a few years ago after reading about it on the blog Lilacs and Lace.  This seamstress highly recommends this rayon tape to finish seam allowances and hems (she has a tutorial), so I had picked some up just in case I wanted to try it one day. If you want to see real couture sewing and vintage-inspired pieces from BEFORE the 1980s, visit this blog!

The oatmeal color of my Snug Hug tape was perfect for this project.  I sewed it to the edges of the sleeves and the bottom, pressed up the hems and hand-stitched, picking up single threads as I went so as the stitches aren’t detectable on the outside. 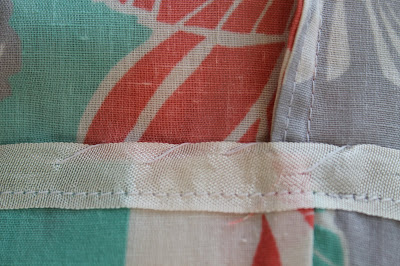 Now I’m ready for my morning coffee on the lanai! 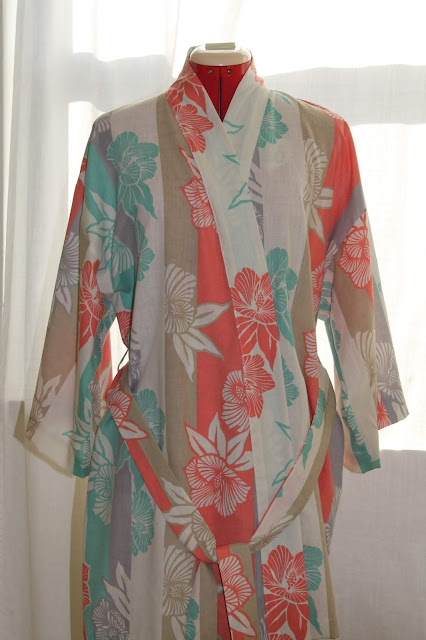 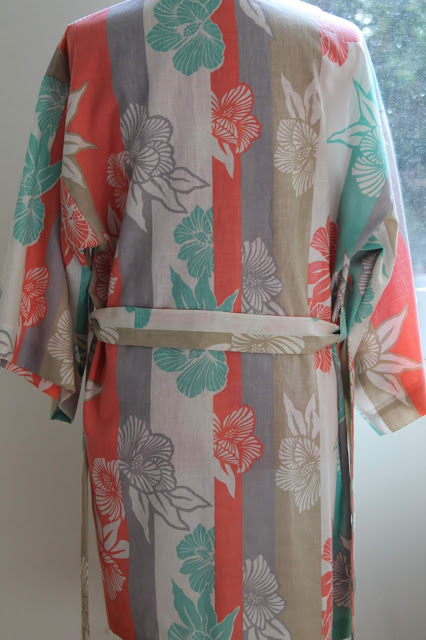 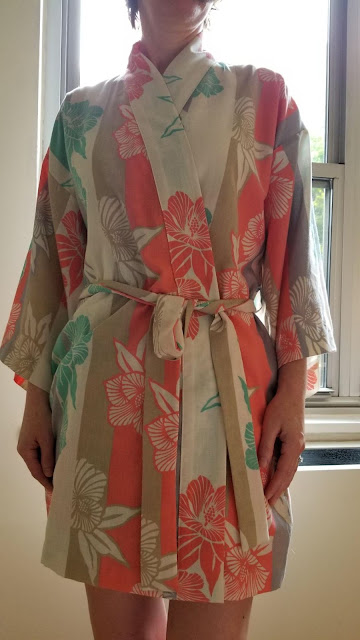 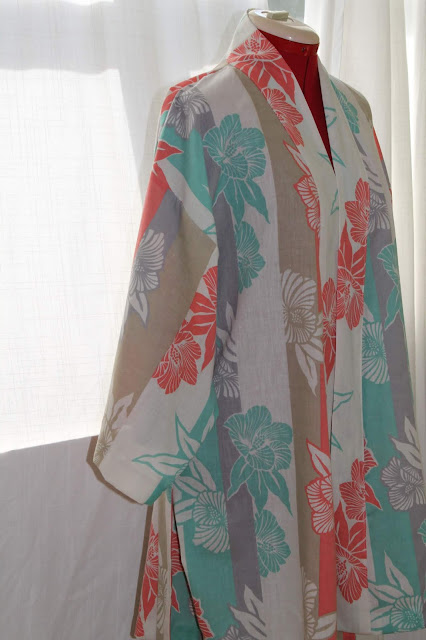 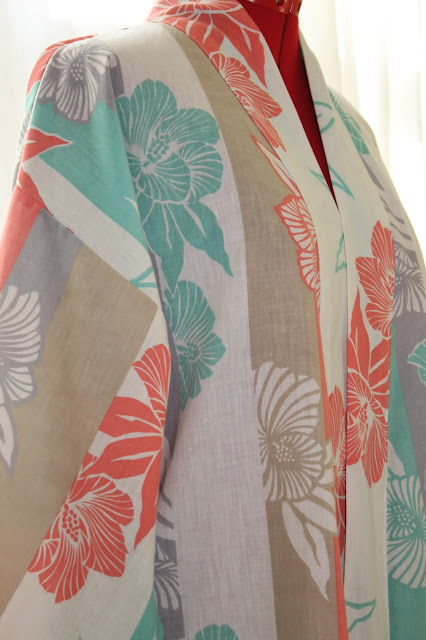 This would have been a good bathing suit cover-up after swimming at Jean’s house back in the day.  To her and all the Girls back in high school: Thank you for being a friend! 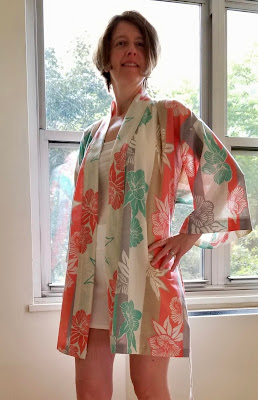