The Bonfire of the Vanities by Tom Wolfe (1987)

Although the 1980s began in a recession,  the stock market soon began to soar astronomically, injecting huge amounts of wealth into certain segments of society before crashing in 1987.  For many, these were heady years, full of giddiness, good times and downright hedonism. Wealthy or not, the feelings seemed to be contagious. In came the big hair, the bold colors and the jewelry which at times seemed to channel that of the ostentatiously rich.  Regular girls wore ropes of faux pearls and fake gem brooches while rappers piled on thick gold chains:

The excesses of the 1980s were writ large in New York City, the home of all that is huge and over the top.   For the epicenter of that wealth explosion was Wall Street, and from there flowed many stories of social ascendency and moral decay.


The Bonfire of the Vanities is one of those stories. 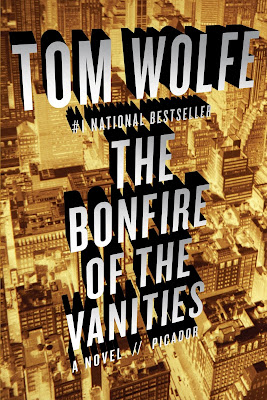 This novel describes the rise and fall of Sherman McCoy, he of the Yale chin and $1M bond trader’s salary.  Or rather, it’s the story of a WASP who made more money on top of family money, and how the life he built all came crumbling down.


Sherman’s story is supported by a vast and colorful set of quintessentially New York characters and crucial storylines that all weave together to create one epic tome.  I loved it. Wolfe provides such believable (and often hilarious) detail and dialog that the book feels like a piece of journalism at times.


Those enduring themes of class, race and sex underpin the book and allow it to remain relevant over 30 years later.  But enough of the heavy stuff. And I don’t want to spoil this excellent read for anyone who may not have picked it up yet.


There are some fashion moments in this novel.  For example, when Sherman meets Maria at the airport:


“In this mob she looked like something from another galaxy.  She was wearing a skirt and a big-shouldered jacket of a royal blue that was fashionable in France, a blue-and-white striped silk blouse, and electric-blue lizard pumps with white calf caps on the toes.”


Later, at an exclusive dinner party,  Sherman scrutinizes the women, basically dividing them into first wives and second (trophy) wives.  The first (older) wives are “skin and bones”, “starved to near perfection”:


“To compensate for the concupiscence missing from their juiceless ribs and atrophied backsides, they turned to the dress designers.  This season no puffs, flounces, pleats, ruffles, bibs, bows, battings, scallops, laces, darts, or shirrs on the bias were too extreme.  They were the social X-rays, to use the phrase that had bubbled up into Sherman’s own brain.”


Tom Wolfe may have had Christian LaCroix in mind when writing those words.   This is a good article about the designer, whose clothing many feel epitomizes the excesses of the 80s.  He also invented the “pouf” skirt which had many variations.


The following are from Christian LaCroix shows in 1987, the year The Bonfire of the Vanities was published: 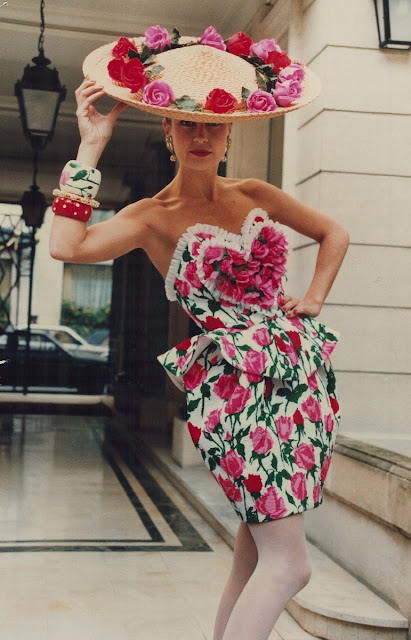 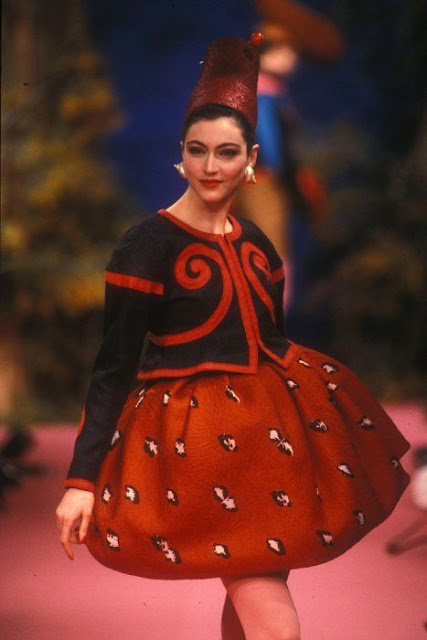 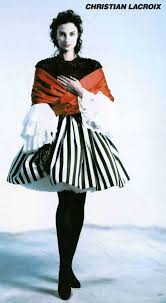